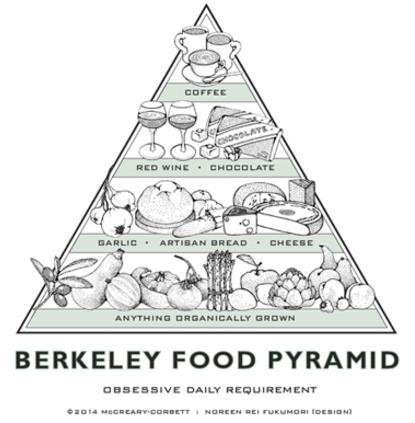 The Berkeley Food Pyramid is on display in the Smithsonian’s first major exhibition on food history –– “FOOD: Transforming the American Table 1950-2000,” opened at the National Museum of American History November 20, 2013. The on-going exhibition “explores some of the major changes in food and eating in postwar America––changes in food production and processing, in who cooks and why, where and when meals are consumed and what people know (or think they know) about what is good for them.”  The Berkeley Food Pyramid is featured in an area that includes purveyors and artisanal producers who have contributed to the California cuisine phenomena.

The Inside Story:  What was conceived as an inside joke over countless dinners and glasses of wine between friends, foodies and Berkeley denizens –– Renée Robin, Scott McCreary, Mary Hardy and Michael Corbett, now has a place in the Smithsonian National Museum of American History. Their version is a twist on the old USDA nutrition guide that reflects a truer priority of the Berkeley food culture. Renée Robin approached Noreen Rei Fukumori to design and illustrate the Berkeley Food Pyramid that was then made into t-shirts as gifts for friends and family. One of the t-shirts was given to ornithologist, Russell Greenberg, who gave a lecture at the UCB Lair of the Bear family camp in the summer of 2003. In 2011 Nanci Edwards, the program manager at the Smithsonian National Museum and colleague of Mr. Greenberg, was in the midst of planning the Food exhibition. She had noted Mr. Greenberg's, by then, well-worn t-shirt and thought the iconic graphic was a fitting addition to the exhibition. She contacted Ms Fukumori about including the Berkeley Food Pyramid in the show (by tracing her through the credit-line that was still legible on the t-shirt). And the rest, as they say, is history...

No Portion of this website may be reproduced, copied,  or reused in any way without written permission